When the Salvadoran military seized power in a coup d’etat in 1979, the United States turned their attention to the small Central American country in the hopes of stopping the influence and spread of communism. Under President Carter, U.S. foreign policy attempted to address the human rights abuses and economic and political inequalities evident in El Salvador. Carter’s plan, however, lacked cohesion. His plan did not end aid to the Salvadoran government and it failed to incorporate the armed insurgent groups.

On the heels of the Vietnam War, which many U.S. citizens considered a failure, and the Sandinista victory in Nicaragua, Reagan wanted to ensure that conflict in El Salvador would not end with a similar outcome. From the start of his tenure as president, Reagan increased economic and military aid to the Salvadoran government. He, along with U.S.  ambassador to the U.N., Jeane Kirkpatrick, argued that the $4 billion in aid to El Salvador was a necessary component to strengthening the staunchly anti-communist military and squashing the enemy guerrillas. The U.S. government blamed the FMLN for human rights violations and downplayed the abuses committed by the Salvadoran government, going so far as to deny the existence of military-linked death squads like the ones who ravished El Mozote. Reagan’s policy-making was shaped by the fact that he did not want to have “another Vietnam” on his hands and because he feared that communism’s victory in El Salvador would cause a Communist takeover throughout Latin America. Although the Reagan administration later turned its attention to the Contra war in Nicaragua, the excessive aid packages given to Salvadoran military in the early 1980s left a lasting legacy. 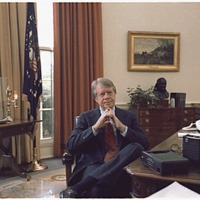 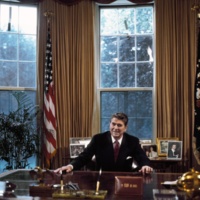 Ronald Reagan, 40th President of the United States, who advocated for assisting the right-wing government and the military of El Salvador. 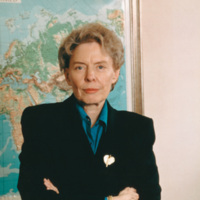 Jeane Kirkpatrick, U.S. Ambassador to
the U.N. from 1981 to 1985 and
member of President Reagan's
National Security Council. 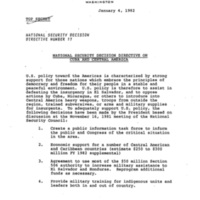 National Security Decision Directive Number 17, which outlines U.S. policy in Central America, including "to assist in defeating the insurgency in El Salvador," 4 January 1982.