By 1981, the civil war in El Salvador had officially begun. Because the FMLN had organized the peasantry to fight against the government, the Salvadoran military targeted rural areas in the hopes of preventing the spread of guerrilla warfare. Counterinsurgency tactics were put in place, not only against the armed members of the FMLN, but also against civilians in the countryside. “Death squads” entered areas designated as sympathetic to guerrilla fighters and left nothing behind, burning whole villages and murdering their inhabitants. For example, the Atlacatl Battalion attached to the Salvadoran military obliterated the village of El Mozote, where 800 villagers perished in gruesome deaths by fire and sword.  Of the estimated 75,000 killed in the civil war, a United Nations Truth Commission only attributed 5% of the total deaths to the FMLN compared to the 95% attributed to security forces of the government.

Witnessing these atrocities, the FMLN spent the early 1980s responding to the military’s outrageous acts. They employed a strategy that mixed offensive attacks with observation of the enemy which would ultimately inform their future actions. The Salvadoran military, however, did not have a solid strategy against the FMLN.  Instead, they relied on the United States to provide support for the authoritarian government and to strengthen their ability to combat guerrilla activity. Both sides soon realized that the war could not be won on offensive attacks alone. While the government increased its reliance on U.S. aid, the FMLN by 1984 focused on winning support from the masses. 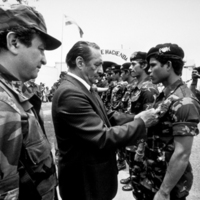 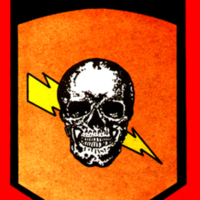 The insignia of the Atlacatl Battalion,
the most elite, well-trained counterinsurgency
force in the Salvadoran military. 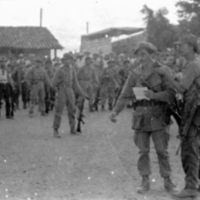 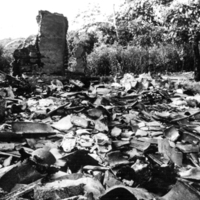 The aftermath of the
El Mozote Massacre, 1981.
Only one villager, Rufina Amaya,
escaped with her life.