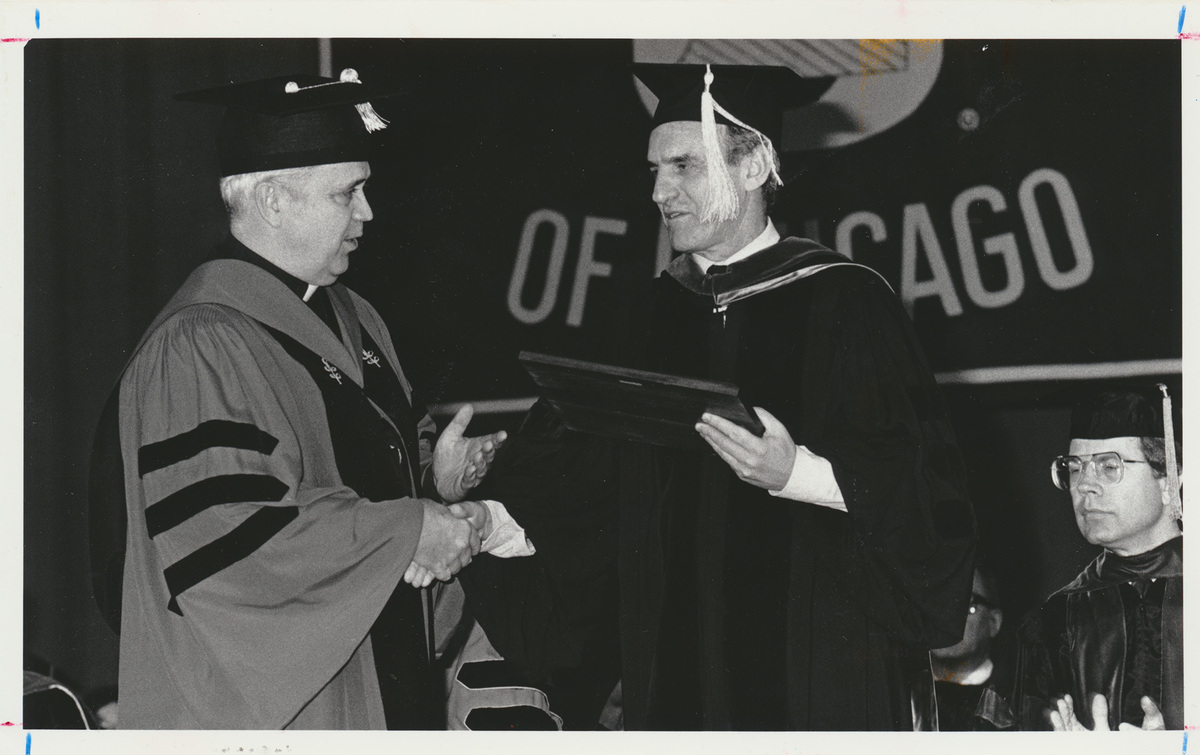 Ellacuría receiving his honorary degree during
Loyola's commencement ceremony in 1986.

When Santa Clara University awarded Ignacio Ellacuría an honorary degree in 1982, Loyola was inspired to do the same. Loyola philosophy professor Tom Sheehan attended Santa Clara's convocation after having just returned from a dangerous trip to El Salvador. Sheehan met Ellacuría, who was hiding from the Salvadoran government out of fear of attack and death, at Santa Clara. At that meeting, Ellacuría told Sheehan about what he believed to be fraudlent elections in the March 1982 elections which returned power to a civilian president, Jose Napoleon Duarte. The U.S. government touted Duarte's election as a step in the right direction. Sheehan later wrote about this in the New York Times, in one of the first essays to criticize the Reagan administration’s foreign policy. In the early 1980s, Ellacuría remained in hiding while Sheehan returned to Central America, visiting the much safer Nicaragua with a group of students from his "Revolution and Ethics" course. Loyola's Jesuit community assisted in sponsoring Sheehan and the students to be eyewitnesses to the atrocities occurring, and, upon returning, Sheehan and the students set out to inform both Loyola and the Chicagoland area of their findings. It was also after this trip that Sheehan had the idea for Loyola to give Ellacuría an honorary degree in the hopes of building his international public profile to such a degree that the Salvadoran death squads would avoid him. Sheehan proposed the idea in December of 1985 to philosophy department chair Fr. Robert Harvanek, S.J. who used his connections with the Jesuit community and within the administration to gain approval for Ellacuría’s honorary degree with little to no opposition. Although considered by some at the time to be theologically conservative, Loyola’s Jesuit community still wanted to recognize and support Ellacuría's work for social justice on behalf of El Salvador's marginalized citizens.

While planning Ellacuría's trip to Chicago, the Salvadoran government bugged a phone conversation between Sheehan and Ellacuría. According to Sheehan, both men heard hushed voices and a typewriter in the background. Upon realizing what was happening, Ellacuría swore the military men off the line and informed Sheehan that the rest of the conversation should happen in fast English to prevent the intruders from understanding the conversation. Ellacuría arrived safely in Chicago to receive his degree, and he enjoyed a dinner reception with some of Loyola’s wealthiest donors the night before the ceremony. Sheehan, sitting with Ellacuría and the donors, enjoyed the irony of the dinner as donors expressed their surprise at the "brilliant, funny, and sophisticated" Ellacuría who steered his conversation with this conservative crowd toward topics like Marxism.