Archbishop of San Salvador
Oscar Romero, one of the earliest
Catholic critics of the Salvadoran government. 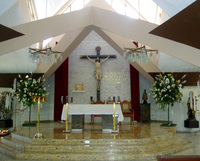 Altar at the chapel of the
Hospital de la Divina Providencia in
San Salvador where
Archbishop Oscar Romero
was murdered while saying
mass on 24 March 1980.

Bodies of three of the four
Maryknoll nuns killed by members
of the Salvadoran National Guard
on 2 December 1980.

While the Salvadoran middle class and the United States exacted great influence in El Salvador during the civil war, the Catholic Church and its clergy became important leaders in the struggle for social justice. Much like the union members and student groups who helped to organize the peasantry, progressive members of the Catholic Church in Latin America moved toward liberation theology, a new way of framing the faith that advocated for poor and marginalized peoples. The Salvadoran government, however, worried that the actions of church leaders would threaten their power and stability, since the formation of peasant organizations often led to political protest. Meanwhile, leaders of the Catholic Church in El Salvador, like Archbishop Oscar Romero, vocalized what they believed to be human rights violations waged by the military.

The military actively targeted the Catholic Church throughout the 1980s. Before the civil war officially began, the military ordered the murder of Oscar Romero, who was shot while celebrating Mass. The next year, in 1981, Salvadoran military forces gunned down and raped four American churchwomen. This introduced a whole new dimension to the already controversial involvement of the United States in Salvadoran affairs.

Through their work with the peasantry and the poor, clergy sought to address the long history of inequality and injustice of marginalized people, to support their right to initiate action through popular organizations, and to transform their social realities. As president of the Jesuit-run Universidad Centroamericana, Ellacuría and his colleagues were outspoken about the rights of the poor and about the military’s violence against Salvadorans. This only intensified the government’s response. When the FMLN launched an offensive attack in the center of San Salvador in 1989, Colonel Rene Emilio Ponce handed down orders to search the university campus and, as a result, to execute the six Jesuits. Among those murdered was Ellacuría, whose example continues to live on and demonstrate how the Catholic Church became such a pivotal organization in El Salvador.