In 1981, students at Loyola founded LOSPES, the Loyola Organization in Solidarity with the People of El Salvador. Prior to this, Loyola’s Amnesty International was the major organization to support the people of El Salvador. Roy Bourgeois, an outspoken advocate for Salvadoran rights, talked with Amnesty International members at Loyola about the atrocities he had witnessed. He refused to leave campus until Loyola formed an organization devoted to protecting the rights of the Salvadoran people. Thus. LOSPES was born. According to its own constitution, LOSPES had a two-fold mission: to "study how American foreign policy affects [the] conditions [in El Salvador] for better or worst" and "to bring pressure…upon our government to cease its military, economic, and diplomatic intervention when it interferes with the self-determination of the Salvadoran people." It did so through general meetings and film screenings open to the public in order to inform Loyola students, faculty, and the larger Loyola community about the war in El Salvador. LOSPES also presented jarring photographs of the human rights abuses in El Salvador at a table in Loyola’s Centennial Forum Student Union (CFSU). Even those not on Loyola’s campus could receive information from LOSPES thanks to the weekly radio program "Update: El Salvador" aired on WLUW, Loyola’s radio station. The next few years saw the growth of the organization in both members and visibility. In 1984, LOSPES hosted a conference on Central America, featuring art, films, and academic speakers relating to issues in Guatemala, Nicaragua, and El Salvador. They even held a benefit concert for a local Salvadoran family who had come to the United States to escape the horrors in their homeland. LOSPES also participated with the Chicago chapter of CISPES and sent a delegation to Washington, D.C. in 1982 to march in protest. Because of their association with CISPES, LOSPES fell victim to infiltration at least once, according to faculty mentor Dr. David Schweickart, who claimed that members recognized the spy by his enthusiasm and attempts to make the group participate in more radical forms of protest. Led by Dr. David Schweickart and Dr. Tom Sheehan from the department of Philosophy, LOSPES can be considered part of the peace movement phenomenon and, more importantly, an ally to principles of human rights and Jesuit ideals.

In the 1980s, Loyola's student newspaper, The Loyola Phoenix, was also used as a platform for discussing events and informing readers about the situation in El Salvador. Students and faculty representing both sides of the political spectrum wrote op-ed pieces in which they discussed U.S. economic and military involvement in Nicaragua and El Salvador. Much like the peace movements, the methods of spreading the message of U.S. influence in Latin America in The Loyola Phoenix varied. One striking example of intense political discourse comes in early 1986 when Dr. Tom Sheehan of LOSPES debates political science professor Dr. Sam Sarkesian on U.S. involvement in Nicaragua. This written debate had the power to spark student responses to the situation and eventually caused both sides to agree to a formal debate on the subject of Nicaragua. In addition, political cartoons were regularly featured, often taking aim at Latin American relations. Student artist Grosso’s 1982 cartoon features Uncle Sam firmly grasping Central America as Fidel Castro shoots arrows into his rear while a fish offers the helpful advice of "Don’t let go… Or it’ll turn as red as your face." The Loyola Phoenix became an influential platform for supporters of both political agendas to express their beliefs in a mediated fashion. 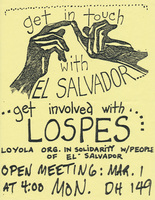 Advertisement for LOSPES,
the Loyola Organization in Solidarity
with the People of El Salvador. 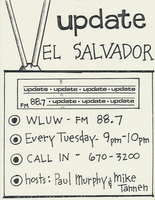 Debate between Dr. Sheehan and Dr. Sarkesian on U.S. involvement in Nicaragua published in The Loyola Phoenix, 1986. 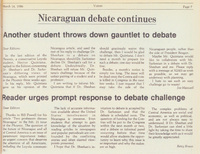 Students respond to the Sheehan-Sarkesian debate on U.S. action in Nicaragua previously published in The Loyola Phoenix, 1986.

Flyer advertising a large-scale demonstration in Washington, D.C. to protest U.S. military and economic aid to El Salvador. Loyola students participated in an event like this in Washington in 1982.