The Solidarity Movement emerged in Poland in opposition to  the governing Communist regime at the end of August 1980. Solidarity found significant support in Poland—one-third of the total working age population were members by September 1981—as well as among Polish-Americans who largely disapproved of the Soviet-controlled government.

When the Polish government attempted to destroy the movement in the early 1980s, Polish organizations around the world showed their support for the movement by providing financial aid. Throughout the 1980s, the Legion of Young Polish Women donated over $6,000 in support of Solidarity for the purchase of clothing, food, and medical supplies. 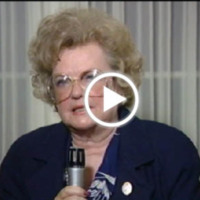 Stephanie Jagielski, President from 1980-1982, describes the Legion's support for the Solidarity Movement during those years. Click this image and scroll down to watch the video. 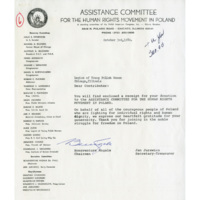 This letter exemplifies the Polish-American reaction to Solidarity, characterizing it as a fight “for individual and human rights” as well as a “noble struggle for freedom.” Click to read the full letter. 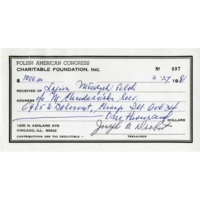 During the 1980s, the Legion donated over $6,000 in support of the Solidarity Movement, the majority of it through the Assistance Committee for the Human Rights Movement in Poland of the Polish American Congress. 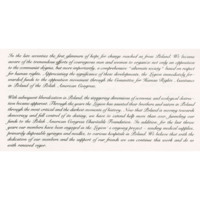 Written just months after Solidarity succeeded in gaining free elections in Poland in 1989, the Legion reflected on their support for the movement in the White and Red Ball Program from 1990. Click to read the passage.