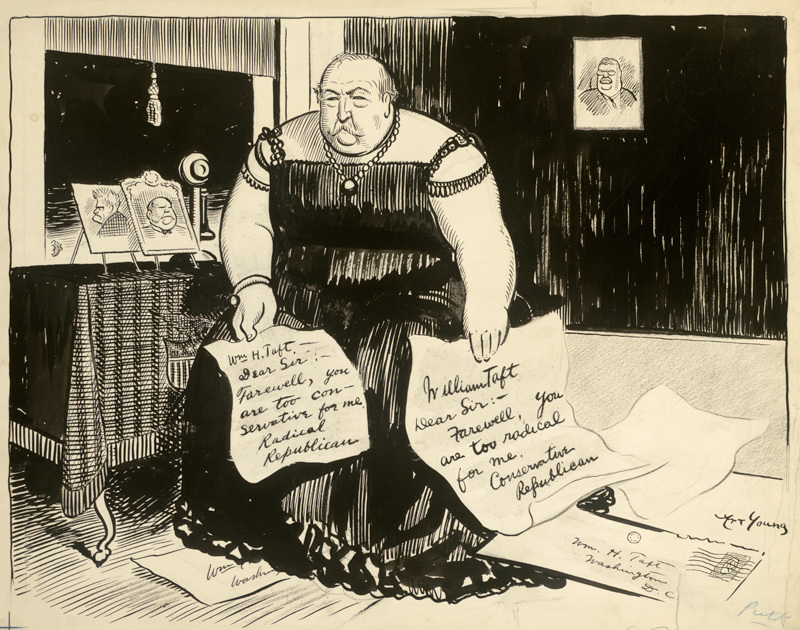 Sitting President Theodore Roosevelt refused to run for reelection in 1909, instead selecting William Howard Taft as his successor for the Republican nomination.  Taft served as president from 1908 to 1912, but his presidency was marred by impressions that he was indecisive and weak-willed.  Unhappy with Taft’s administration, Roosevelt tried to obtain the Republican nomination in 1912. This created a deep rift in the Republican Party, and ultimately Roosevelt started the “Bull Moose Party” and ran for president as a Progressive, drawing many of the more progressive Republicans with him and allowing Woodrow Wilson to win the election. To illustrate the split, Young depicts Taft as an abandoned woman. Taft is surrounded by photographs of the people who once supported him, including Roosevelt, and holds notes from radical Republicans who have deserted him for being too conservative and conservative Republicans who have deserted him for being too radical. Young plays into gender stereotypes of the time by depicting Taft as a woman in order to show Taft’s indecisiveness and passivity.