The annual retreat dates back to 1873 and St. Ignatius College, when the Jesuits started offering a three-day religious and spiritual retreat for juniors and seniors. The retreat offered time to withdraw from the busy world of classes and work so that the students could devote time to their spirituality. The Jesuits would lead students in spiritual exercises such as spiritual readings, sermons, and the keeping of silence. As St. Ignatius College grew and became Loyola University, the Jesuits held separate retreats for each of the different schools. In the 1970s underclassmen were offered the opportunity to join the annual retreat. University Ministry still continues to offer various retreats for Loyola students, including the traditional three-day retreat for first-years and seniors. 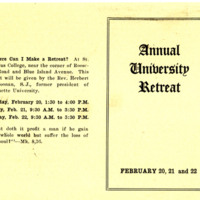 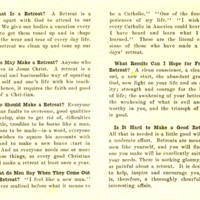 The other side of the St. Ignatius retreat flyer. 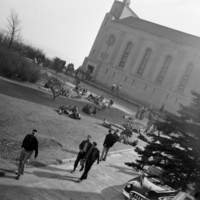 Students outside Madonna della Strada during the 1952 Annual Retreat. 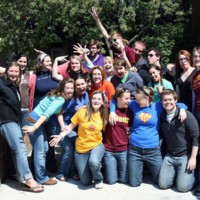 A group of students ham for the camera during their Senior Retreat, May 5, 2008.