The Sword of Loyola is given to an individual who exhibits exceptional dedication and humanitarian service in fields other than medicine. The Sword of Loyola award was conceived by Loyola alumnus Norton F. O'Meara in 1964, and is awarded each year at the Annual Awards Dinner held by the Stritch School of Medicine. The first recipient of the award was the Director of the Federal Bureau of Investigation, J. Edgar Hoover (1964). Throughout the years recipients of this prestigious award have included Muppets creator Jim Henson (1982), Loyola alumnus Bob Newhart (1975), director of the Boston Symphony Orchestra Arthur Fielder (1976), and Joseph Cardinal Bernadin, Archbishop of Chicago (1989). The sword is a replica of St. Ignatius Loyola's sword, which the founder of the Society of Jesus offered as a symbol of becoming a spiritual soldier of Christ. The sword symbolizes the distinctive spiritual qualities associated with St. Ignatius of Loyola - courage, dedication, and service. 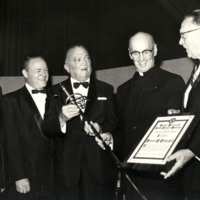 J. Edgar Hoover receives the first Sword of Loyola in 1964. 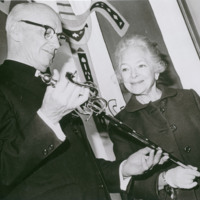 Actress Helen Hayes recieves the Sword of Loyola in 1971. 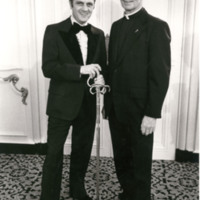 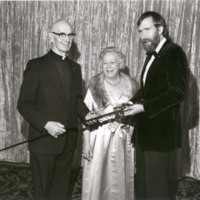 Jim Henson, creator of the Muppets, receives the 1982 Sword of Loyola.