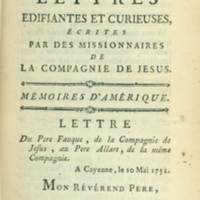 Letter by Fr. Cholenec of the Canadian missions with an illustration of Catherine Tegahkouita Iroquoise (1715)

Tomes 6-9: Mémoires d’Amérique
The Lettres édifiantes et curieuses were first collected, edited and translated by Jesuits J.-B. du Halde, C. le Gobien and others at the turn of the eighteenth century, and first published in Paris in thirty-four volumes from 1702 to 1776. This popular collection of “edifying and curious letters” from foreign Jesuit missions differed significantly from earlier published collections. The letters were uniformly translated into French and judiciously edited by Du Halde and his colleagues (sometimes over the vociferous objections of the original authors), given a logical arrangement by geographical area, and adorned with numerous engraved maps and illustrations. Reprinted well into the nineteenth century, and widely imitated, the Lettres édifiantes et curieuses were instrumental in determining how generations of educated Europeans saw the “new world” and its peoples.