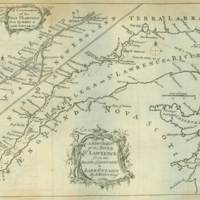 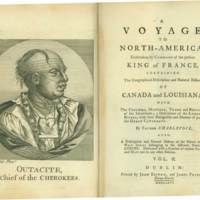 Title page of A voyage to North-America... with an illustration of Outacite, Chief of the Cheerokees (1766) 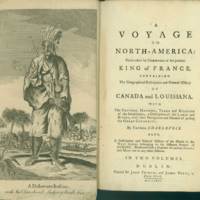 Title page of the second volume of A voyage to North America... with an illustration of a Delaware Indian (1766)

A voyage to North-America: undertaken by command of the present king of France . . . (Dublin, 1766)

Translation of a journal kept by the Jesuit explorer Pierre-François-Xavier de Charlevoix during an exploratory voyage through the Great Lakes and down the Mississippi River, during the years 1720-1722. The journal, composed in the form of letters to the duchess of Lesdiguiéres, describes Canadian and Indian customs as well as geographical features of the country.